Great weekend for The Sweetest Coton breeding. They were in this year our last show. 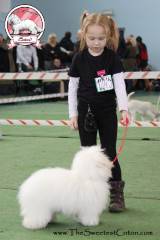 Elvis Reco Bohemia – exhibited in the Veteran class was awarded the title Best Veteran and BOS (Best dog of the opposite sex),

FRESSIA The Sweetest Coton – in puppy class, presented by Sandra got Very Promising and Best Puppy,

BOB (winner of Breed) on this show fell into the hands of our breeding females CHANEL The Sweetest Coton. 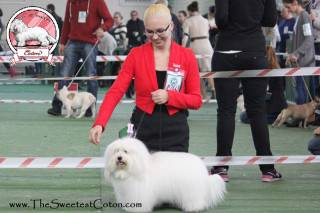 ELVIS Reco Bohemia – Class Veterans awarded the title of Best Veteran and BOB (Best of Breed). I was very proud of my first and oldest Coton in our house, that could have its charm to charm the judge, and despite the younger dogs in the ring that he has just received BOB. But our “old man” surprised us even more when the finals received 2nd place Best in SHOW Veteran.

ELECTRA The Sweetest Coton – in competition in the junior class won CAJC and Junior Winner.

FRESSIA The Sweetest Coton – in puppy class got Exceptionally promising puppy and The finals BEST IN SHOW took 2nd place! 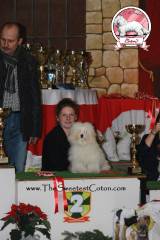 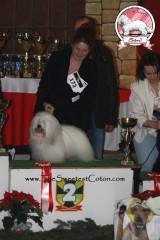 It was a great weekend for The Sweetest Coton also because in Slovakia at the international exhibition of dogs female from our kennel Fuschia The Sweetest Coton won BIS 1 (Best in Show) and the second day of the BIS 2. We are very pleased with the success of our dogs. CONGRATULATIONS! 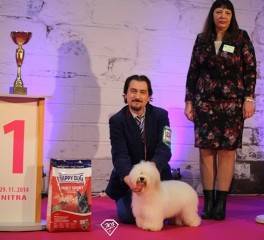